If you lived in Laguna Beach during prohibition you would have recognized his name in a heartbeat— Anthony "Tony-the-Hat" Cornero.

If you had made the mistake of crossing him, perhaps the name alone would send shivers up your spine.

Tony the Hat was Southern California’s most famous rumrunner; notorious throughout the county. The mobster used a pretty simple scheme: with a shrimp boat acting as his cover, he smuggled massive shipments of whiskey and rum into Southern California. His shrimp boat would then idle three miles offshore while small skiffs, painted black, delivered case upon case of contraband to Laguna’s secret coves. One of the popular drop off points for the contraband was Crescent Bay, isolated from view from the rest of the coast it made for the ideal spot to truck in the liquid gold.

Laura Davick, who wrote CRYSTAL COVE COTTAGES: ISLANDS IN TIME ON THE CALIFORNIA COAST tells stories of delivery crews dropping burlap sacks full of alcohol overboard rather than risking capture. Later, when bottles of booze were found rolling around the shallows, locals would collect them and throw parties. The book LEGENDARY SURFERS by Malcolm Gault-Williams details the city’s first surf-explorers having the beaches to themselves “except rumrunners’ leftover crates, boxes, and bottles.”

Even if the apocryphal stories can be believed, one of Tony’s skiffs once washed up on the sand at Crystal Cove, piled high with cases of spirits. Local residents, living in tents right on the sand, were used to finding a stray bottle or two…but this was different. For 36-hours the boat and the crates never moved. No one dared touch the Admiral’s liquor. On the second night, the entire shipment vanished, leaving only the wrecked boat behind.

Tony was a millionaire before age 25; but he’d been arrested by 27 and fled the country (later, he would resurface in the Las Vegas criminal underground). There was no shortage of bootleggers waiting to take his place. The Orange County photo archives have images of James Cagney-looking police officers posing with their guns drawn, aimed at boats sitting offshore. That’s not to say that all of the seized alcohol was dumped out. One local police official claimed that prohibition “ruined a generation of good cops” by corrupting them. So it’s no surprise that the rumors of booze drops in Laguna Beach’s many secluded coves persisted.

Naturally, all of that alcohol had to get stored somewhere, and there aren’t many old buildings in town that don’t have at least a few tales of hidden rooms and clandestine drop offs. One of Laguna Beach’s oldest standing structures, the MURPHY SMITH BUNGALOW (where the Laguna Beach Historical Society is currently based), was purportedly a favorite stash spot for rumrunners.

As for consumption, Laguna Beach in the twenties and early thirties had become a haven for movie stars trying to party away from Hollywood’s ever present flashbulbs. Douglas Fairbanks and Mary Pickford owned a home in Irvine Cove that was frequented by their famous friends. A number of prominent movie producers enjoyed the proximity to LA and the bohemian vibe, buying up their own properties in town. Of course, often times the booze never left the beach—multiple histories point out that the very best parties were usually those held right on the sand.

These days you can drink legally at any number of spots in town, but the mythos of Tony the Hat and his bootlegging ilk continues to grow, fueled by the occasional glass bottle appearing on the beach after a good storm.

Now you have a chance to own a slice of the Laguna Beach prohibition history with a home that overlooks the notorious cove, Crescent Bay, that holds secret stories of rum runners. Luxury Home Buyers shows off this enchanting property in the video below.

**We have done our very best to ensure the veracity of everything contained in this article. However, the world of Laguna Beach’s prohibition history is filled with tall tales and seeing that many of the anecdotes were drawn from second and third hand reports, it is possible that the ‘sauce was stretched’ at some point down the line.** 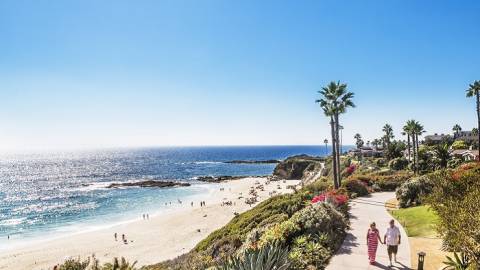 ​With so many attractions packed into one small, beachside city, deciding where to explore first is no easy feat. READ MORE Passport to the Arts

The PASSPORT TO THE ARTS is back! READ MORE 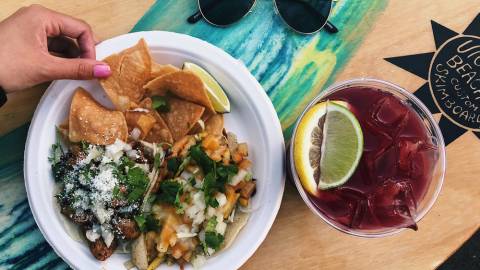 Handheld, portable, and flat out delicious, we don't know anyone that doesn't appreciate these small bundles of joy. READ MORE