Right here in southern California is one of the best places on Earth to witness the most extraordinary giant on earth – the blue whale!

Where to See Blue Whales in Laguna Beach

The best way to spot blue whales is by boat because of their preference for feeding in deep water along the edge of the underwater canyon along our coastline.

When to See Blue Whales in Laguna Beach

Little is known of their migration patterns, but the best months to see blue whales in Southern California is May-September when they are frequently spotted off Laguna Beach's coastline.

The Largest Animals On Earth

Blue whales are the largest animals that have ever lived on planet earth, even bigger than any dinosaur! Averaging around 80 feet long, they can stretch to over 100 feet – as long as three school buses in a row! Weighing as much as 40 elephants, they must eat a TON in order to maintain their massive body size (three tons to be exact!) Every day they must consume nearly 6,000 pounds of food, which is approximately how much food an average human would eat in three years! One of the most amazing things is that the largest animals in the world feed almost exclusively on some of the smallest – krill! Tiny shrimplike animals, krill are smaller than your pinky finger. Underwater, krill form large patches and a single blue whale can wipe out over 40 million of them in one day!

What do Blue Whales Eat?

One of the most amazing things about blue whales is that the largest animals in the world feed almost exclusively on some of the smallest – krill! Tiny shrimplike animals, krill are smaller than your pinky finger. Underwater, krill form large patches and a single blue whale can wipe out over 40 million of them in one day!

How do Blue Whales Eat?

Blue whales belong to a category called baleen whales, meaning they lack teeth. Instead, hanging from their upper jaw are plates made of keratin (the same substance our hair and fingernails are made of) which they use to filter out food from the water column. Their expandable throat groves allow them to gulp huge volumes of water, which they push back out through the baleen, trapping their prey inside like a giant spaghetti strainer. Don’t be worried about being swallowed by a blue whale though; despite their enormous size, their throats are no bigger than a beach ball!

The coast of Laguna Beach is an ideal habitat for blue whales because of the deep-water canyon located close to shore. Within a few miles the water depth suddenly drops from around 100 feet to over 1000 feet. This drop-off creates a phenomenon called upwelling, where nutrient rich water from the sea floor is carried up to the surface, kickstarting the food chain.

The Laguna Beach coastline has three Marine Protected Areas, or conservation areas, which limit fishing and human activity to protect critical natural and cultural resources. MPAs are important because they protect the habitat of thousands of ocean species and offer opportunities for people to experience and study marine life that is undisturbed and truly wild. MPAs allow blue whales to thrive by providing a clean, healthy habitat with abundant food.

Where do Blue Whales Migrate?

Why are Blue Whales Endangered?

We are extremely lucky to see blue whales in our waters because they were nearly wiped from the face of our planet throughout the 1800s- the early 1900s due to whaling.

Whales were hunted for their blubber, which was boiled down and used in lamps and streetlights. Hunted to the brink of extinction, only around 10% of their pre-whaling numbers remain in oceans around the world. Only 2,000 or so individuals are found off the coast of California with anywhere from 10,000-25,000 remaining on Earth. Because of their small population size and pelagic nature, blue whales remain somewhat of a mystery to scientists.

How Many Blue Whales Are There?

The blue whale population worldwide is around 10,000-25,000. Of that number, 2,000 or so individuals are found off the coast of California. Blue whales remain a mystery to scientists because of their small population size and pelagic nature (“pelagic” is Greek for “open sea” and is used to describe the zone blue whales inhabit) 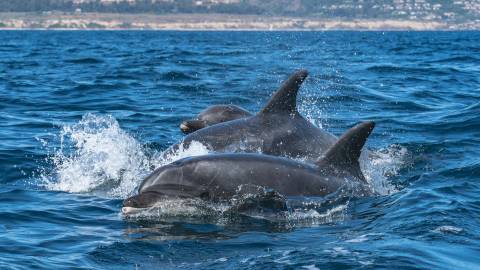 Common dolphins are so much fun, they should be called extraordinary dolphins! READ MORE 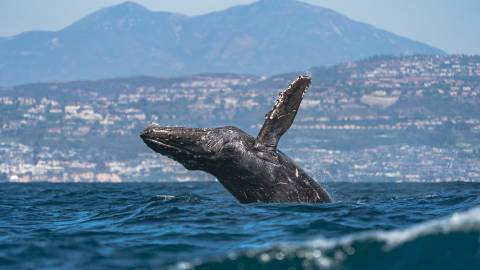 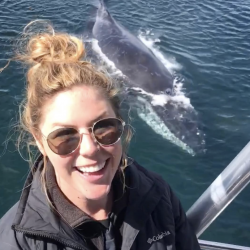