What do you do when you’ve got a local landmark on your hands, when a place seems to be part of the very fabric of the city? Does it have to stay the way locals remember it forever? What if ownership or management wants to take things in a new direction? Should they be beholden to nostalgia?

That was the position Chris Keller was in when he took over as the owner of the Marine Room in 2011. The bar had history, it had a crowd, and it had an established vibe. People loved the place and they were hyper-loyal. So, convention wisdom would say you don’t dare mess with that, right?

Keller, taking over for council member Kelly Boyd, who’d owned the bar since ’87, definitely wanted to honor the past, but he didn’t want to feel like he was in history’s back pocket.

“We knew we wanted to embrace the rock n’ roll vibe, the heart and soul,” Keller explains. “But we also saw an opportunity to add some small touches.”

These included building out the whiskey list, creating some craft cocktails, and filling in holes in the music schedule. In the meantime, Keller’s then-assistant Brittany Ryan had some ideas of her own about what the bar could become.

“I created a tumblr—a kind of visual board of how I saw the bar evolving,” she says. “I took this sensory experience, translated it into photos, and put it in front of the team.”

Soon, Ryan was The Marine Room’s General Manager and running the bar’s various social media feeds. Without any dramatic changes, she’s managed to add diversity to the established clientele. These days, lines stretching down the block aren’t the least bit unusual on a Friday or Saturday night.

“The past is our foundation,” Ryan continues. “It’s the reason the bar is successful. Our social media might bring a younger crowd in, but we don’t just cater to them either. We love our diversity.”

The success of this honor-the-past-but-look-to-the-future approach has been astounding. The older crowd hasn’t been pushed out. They still come in just as loyally as ever and feel the same connection to The Marine Room as they did under Boyd’s watch. But a new generation has emerged too. The best evidence of this was when Justin Beiber showed up in December and played a few songs with the Josh Libero band (including a cover of Drake’s ‘Hotline Bling’). The story went viral and the Marine Room got yet another boost.

Keller and Ryan revel in the fact that their success has come not through rejecting history but embracing it. “Most bars, especially bars that are 82 years old, get locked into a demographic,” Ryan concludes. “We don’t do things like that. We want everyone.”

This Laguna Beach spin on a New York sour is named “1934” for the year The Marine Room first opened. It’s made with Eagle Rare Whiskey and topped with Laguna’s own Red Siren Zinfandel. The organic egg white foam creates the perfect airy backdrop to showcase the 1934 wine-stamp. Cheers! 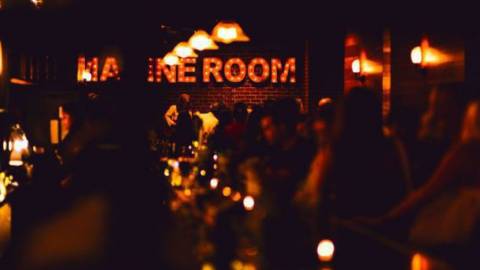