When the first settlers came to Laguna Beach, life was anything but easy.

When the first settlers came to Laguna Beach, life was anything but easy. The only fresh water ran in through a creek and was collected right where Laguna Canyon Road now meets Broadway. In order to maintain a homestead and increase their holdings, in accordance with the Timber Culture Act of 1873, many of Laguna’s first families planted groves of trees. The Australian eucalyptus—which grew quickly and thrived in Laguna’s climate—soon became the “go to” tree for homesteaders. Before long, most of the settlement was dotted with eucalypts.

In 1878, John Damron became Laguna Beach’s third homesteader, taking over the land that now comprises downtown. In 1879, he sold the land to brothers Cyrus and Hiram Rawson before ever making any improvements. Two years later, the Rawsons sold it again, this time to George Rogers and his father, Henry. The sale price? A whopping $1,000.

Unlike Damron and the Rawsons, Henry and George Rodgers were intent on improving the homestead. They planted eucalyptus across their 155-acre spread, growing them from seed and turning the area that currently makes up the business district into a veritable forest. Rodgers, with help from his father, also built a lavish home, called The Old Ranch House, where city hall stands today.

In 1887, George Rodgers made the bold move of subdividing his expansive holdings into single-family lots. He thought non-ranchers would enjoy smaller, easier-to-manage properties—but Rodgers was too far ahead of the curve on Laguna Beach’s building boom, and the parcels didn’t attract many buyers at their hefty $10 apiece price tag.

By the late 1920s, Rodger’s vision for a downtown area with multiple businesses on separate lots had become a reality. The city center played host to a series of shops and soda fountains. Though eucalyptus still flourished on the way into town, most of the trees on what is now Forest Avenue had been uprooted. This proved to be an unbearable frustration for the inaugural members of the Laguna Beach Garden Club. Forming in 1928, the club was active throughout town and highly effective in their advocacy. Club member J.A. Irons focused herself on getting some shade back and oversaw the planting of eucalyptus in front of each business in town. Every time a shop or soda fountain sprang up, a new tree went along with it. The street soon became a favorite subject of the town’s newest populace: plein air painters.

Today, eucalyptus trees still thrive throughout Laguna Beach, just as they did during the days of homesteaders. In North Laguna, in front of Madison Square & Garden Café, “Eucalyptus Bench” by Julia Klemek hints at this rich history. The bench was the first of many artist-designed benches in the city, and is both a resting spot and a clever reminder of the past. Meanwhile, Forest Avenue is widely considered Laguna Beach’s most walkable downtown street, due in no small part to the shade-giving trees that dot the sidewalk. 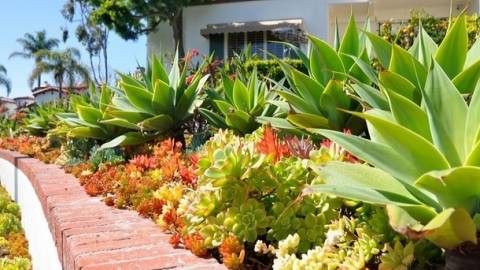