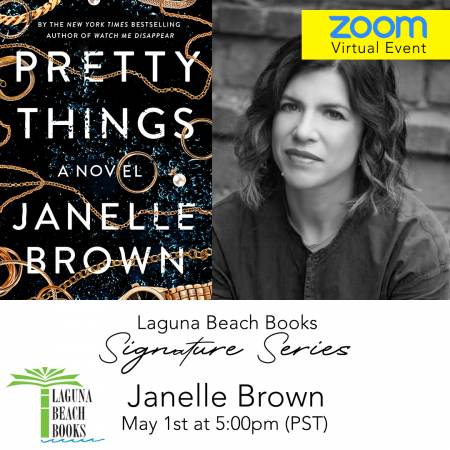 LAGUNA BEACH, CA – Laguna Beach Books is pleased to kick off a new virtual event series. Enjoy a literary evening with Janelle Brown and Louise Erdrich as they speak about their new books and answer your questions. These authors will all be in conversation with Laguna creatives-- Janelle Brown with author Kaira Rouda, and Louise Erdrich with writer Marrie Stone.

These events are free of charge to attend, and books are available to order from our website. Attendees can register by clicking on the link below, and they will be sent a link to the event. Below is a summary:

Two wildly different women — one a grifter, the other an heiress — are brought together by the scam of a lifetime in a page-turner from the New York Times bestselling author of Watch Me Disappear. This mesmerizing novel showcases acclaimed author Janelle Brown at her best, as two brilliant, damaged women try to survive the greatest game of deceit and destruction they will ever play.

Janelle Brown is the New York Times bestselling author of the novels Watch Me Disappear, All We Ever Wanted Was Everything, This Is Where We Live, and Pretty Things. Her journalism and essays have appeared in The New York Times, Vogue, Elle, Wired, Self, RealSimple, Lenny, The Los Angeles Times, and numerous other publications. Previously, she worked as a senior writer at Salon, and began her career as a staff writer at Wired during the dotcom boom years. A native of San Francisco and graduate of UC Berkeley, she has since defected to Los Angeles, where she lives with her husband Greg and their two children.

Kaira Rouda is an accomplished business leader, entrepreneur, national speaker and internationally bestselling and award-winning author. A former magazine editor, and society columnist, Kaira won the Stevie Award for Women in Business for creating the first female-focused residential real estate brand, Real Living, and growing the brand to more than 22 states before its sale to Berkshire Hathaway. Turning to a full-time writing career, her most recent works are Best Day Ever and The Favorite Daughter. She lives in Laguna Beach with her husband, Congressman Harley Rouda, and her four twenty-something children.

Based on the extraordinary life of National Book Award-winning author Louise Erdrich’s grandfather who worked as a night watchman and carried the fight against Native dispossession from rural North Dakota all the way to Washington, D.C., this powerful novel explores themes of love and death with lightness and gravity and unfolds with the elegant prose, sly humor, and depth of feeling of a master craftsman.

Louise Erdrich is the author of fifteen novels as well as volumes of poetry, children’s books, short stories, and a memoir of early motherhood. Her novel The Round House won the National Book Award for Fiction. The Plague of Doves won the Anisfield-Wolf Book Award and was a finalist for the Pulitzer Prize, and her debut novel, Love Medicine, was the winner of the National Book

Critics Circle Award. Erdrich has received the Library of Congress Prize in American Fiction, the prestigious PEN/Saul Bellow Award for Achievement in American Fiction, and the Dayton Literary Peace Prize. She lives in Minnesota with her daughters and is the owner of Birchbark Books, a small independent bookstore.

Marrie Stone co-hosts, "Writers on Writing," a weekly radio show that broadcasts from UC Irvine. The program is dedicated to the craft and business of writing, and features interviews with authors, poets, agents, and publishers. Marrie’s own fiction and essays have appeared in Reed Magazine, Orange Coast Magazine, Stu News Laguna, and various other publications. A former corporate attorney, Marrie lives in Laguna Beach with her husband and daughter.